In this second article of the series looking at the truth behind the buzz about resilience, I’m going to talk about control.

In our model of resilience (below) we mean control in terms of having an impact the conditions in which you find yourself. You cannot always control, what is happening around you, but you can control your response to it – or at least choose a response over an initial reaction. 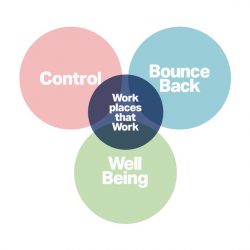 We also mean a degree of self-efficacy, choosing to take on challenges and face risk not because you are unafraid, but becaue you believe you can cope – regardless of the outcome.

Feelings of control are incredibly important. During the 10 years I ran the national research project into work related stress – the 24-7 survey – we discovered something very telling about the impact of control. When we divided the survey population by the hours they worked, the levels of ill health were roughly the same between the long-hours and shorter-hours groups (we used a 48-hour working week as the cut-off point). But dividing the same population into those who felt they were generally in control at work, and those who felt out of control even just some of the time, showed the levels of ill health were three times higher in this second group, and the they illnesses suffered were more serious.

So how can you address this? The first thing you can do strikes to the very heart of this first elements and that is using the language of choice rather than the language of compulsion. It is so easy to fall into the trap of “I have to”, “I can’t”, “I must”, rather than “I choose to” or “I choose not to”. The difference this makes to the amount of adrenaline in your system is surprising. Adrenaline is connected to your fight, flight or freeze system, and as most of these primitive options are no longer available to us in the modern work place, we experience such a reaction as stress. Acknowledging choice reduces this stress reaction. I’ve had some interesting debates on this topic.

One included a conversation with a woman who was adamant she had to work in a high paid job with long hours because she had to put her two children through university without them taking on loans. She experienced high levels of stress, and yet could not let go of the idea she was compelled to do this. Compare this with the woman who told me she’d changed her self-talk from “having to” see her in-laws during Christmas to choosing to do so rather than hurt their feelings. Both of these women were doing something to support others, one however managed to see the choice she was making, and therefore the control she had.

Another way of feeling you are having an impact on what is going on around you is by carrying out random acts of kindness. There is a huge payoff when we are kind to someone. Of course, they benefit, but so do we. We increase our own happiness and wellbeing levels and feel more connected to others and less alone. This is a key element of resilience in difficult times. Click here for a great video explaining how this works.

So between now and the next article, notice how often you describe yourself as compelled to do something – try noticing the choice instead, and see how many acts of kindness you can commit. It’ll do you the world of good.