How many times a day does your child hear that they are stupid, useless or worthless?

How many times a day does your child hear that they are stupid, useless or worthless? Would you be horrified to discover it is probably dozens of times? No matter where they are or what they are doing they will hear these things because they are spoke by the voice in their heads – their inner critic.

As adults we are all too familiar with this particular brand of self-chastisement or even self-loathing. Whenever we try something new, face a big challenge or take a risk; whenever we dare to dream and then reach for that vision the inner critic is there is a flash, ready to put such endeavours to an end before we even begin “You can’t do it “, “Don’t even try”, “You’re not smart enough”, “You’ll look a fool”, “You don’t deserve it”, “You’re just too stupid”. Every time you make a mistake, they appear. “I told you so”, “What an idiot”, “What a complete failure”, “Now everyone knows how rubbish you are”.

Every adult I’ve ever met has heard a similar diatribe courtesy of the critical voice that lives in their head. Regardless of job status, wealth, qualifications or list of achievements, the inner critic is alive and well in each of us, including in our children.

During my work with schools it has become obvious that the roots of the inner critic are planted very early. Even 8-year olds hear from them regularly. This is not through neglect or hash parenting. In fact, it is clear that the vast majority of the children I meet are well loved. Rather it seems that the basic process of being human gives rise to this mean mental companion.

Helping children to calm this voice, and in that stillness find an alternative, is incredibly important for their future development. Learning such skills while young certainly gives them a good chance to tune into a different voice as they grow.

Waging war against this character, no matter how cruel it is, simply does not work. Instead a different, quieter and more thoughtful approach is needed. Steve Chapman explains how he found a successful way to deal with his inner critic better in this TED Talk.

For children I favour a two-part approach. 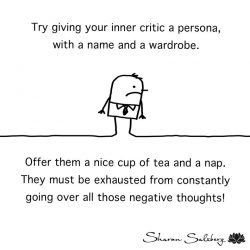 The first part is to identify both the voices of their inner critic and their inner friend. The inner critic is easy to find, and children can identify that voice straight away. Just ask them what they call themselves when they make a mistake. I encourage them to create a complete persona for their inner critic in a similar vein to the advice given to adults by self-compassion expert Sharon Salzberg.

They give their critic a name, description and an outfit, plus examples of what the inner critic says to them and how they feel when they hear such things. I encourage them to write down these things complete with a drawing if they choose.

Their inner friend can be trickier to find. Here I help children by getting them to focus on what compassion and kindness feel like and then to realise they can generate such feelings for themselves. I begin by asking them to focus on times when they have felt cared about, when people have been kind to them, and when they themselves have been kind to others. I ask them to think about how they would speak with kindness and support to a friend who had made a mistake. That’s the feeling they need to focus and concentrate on. When directed towards themselves that becomes the voice of the inner friend. Once again, I ask them to name and describe their friend as well as detail what they say and how it feels to hear it.

Children love this. Their imaginations are wonderful, and I’ve witnessed an amazing collection of creatures they produce to embody their internal experience. It is really helpful for them to be able to identify the voices they hear and realise that they have a choice about which one they listen to. For many this is a completely new idea.

The second element is persuading the inner critic to quietly and peacefully relinquish their role as a guardian. However misguided, the critic has been trying to achieve something. It may have been attempting to protect the child from looking foolish if they fail, or to push them to try harder. Perhaps it was trying to avoid disappointment or to stop them become “too big for their boots”.

Whatever the reason, there was an original purpose but one that was handled in completely the wrong way. No one does better when they are feeling harangued and criticised. Understanding that the critic had an initial purpose is key in reducing its control and increasing the influence of the friend.

I encourage children to take a sympathetic attitude towards their critic, after all it must be miserable job. Allowing the children to take this compassionate stance gives them the mental clarity they need to address the issue. Using visualisation, they are able to “see” their inner friend talk to the critic to calm them and gain an agreement to allow the inner friend to take charge. The critic does not die, but it can be quietened when shown compassion – something it is unlikely to have experienced before. This is not a one-off process, but something that can be revisited at regular intervals – especially at difficult moments when the critic would typically come to the fore.

The difference for the children can be dramatic. Many have commented on feeling a weight lifting off their shoulders or finding a degree of mental peace they’ve not known before. Encouraging children to discuss what their critics say may seem a negative experience, but cultivating the inner friend and equipping them to make the switch is anything but, and the children can look forward to a very different mental soundscape to document their future.